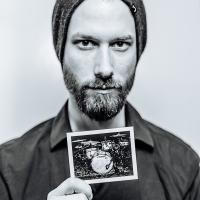 When it comes to music, Benny Greb leads a kind of double life. He is constantly on a plane going somewhere, jetting from Russia to the USA, on his way to Italy or the UK, but judging by his luggage, you would never guess he is a world-renowned drummer. Originally from Germany, he now offers drum clinics all over the world. Although his face graces the covers of numerous drum mags, he is still traded as an insider tip among musicians. At bottom, he is a person to be divined rather than experienced.

Benny Greb has been passionate about drumming ever since childhood. At an early age, during two lengthy stays in the US, he got into music that nobody else in his age group was interested in: Tower of Power, The Police, James Brown, James Taylor, Billy Joel. As his interest in drumming grew, he joined forces with drum makers and started developing his own drum sound. Today, leading drum manufacturers offer several award-winning signature series drums in his name. Aside from his interest in the equipment side, Benny Greb has also developed his own teaching method on which his workshops and clinics are based. His instructional CD & DVD, entitled The Language of Drumming, has become a global sales hit.

Benny Greb has always been present on the German music scene. As well as having produced his own CDs, he has played live and on studio recordings with Ron Spielman, Stoppok, Nils Wülker and Blue Touch Paper. He has also done studio work with Thomas D. However, “when I was invited to play at the 2005 Montreal Drum Festival, things really started taking off. I got lots of enquiries for clinics and jobs. For the first time I had to sit down and think about what I really wanted to do“, sums up Benny Greb.

Now, at 33, Benny has made up his mind to concentrate on his band. It was his fine musical instincts that brought him together with the UK musicians Kit Downes (keys) and Chris Montague (git.). Kit Downes was nominated 'Rising Star' by the Downbeat Magazine in 2013. Aside from being an excellent guitarist, Chris Montague also excels as a composer and has been appointed an associate member of the Royal Academy of Music. The trio has called its band MOVING PARTS. Focussing on intense interaction, the musicians have dedicated themselves to a groove-oriented sound overlaid with jazzy improvisation - electronic transparency meets dirty indie sound. Grinning, the three band members admit that they are fans of Miles Davis, Aphex Twin and Police – ah yes, and Star Trek. Stroking his beard, a thoughtful Benny says: "True, we are a bit nerdy. But the time is right, I have found wonderful musicians in Chris and Kit who pack an enormous punch but can also take it down a gear or two. Our band concept developed straight from jamming together. Live it works like a dream."

The music MOVING PARTS make is tightly and powerfully interwoven. The band is a statement in itself. One sees many young, delighted faces in their audience. A good omen. 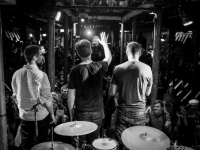 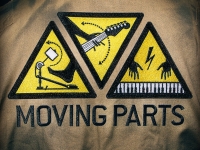