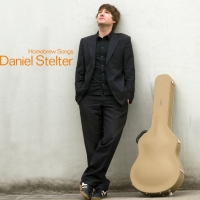 On 'Homebrew Songs', Daniel Stelter invites us to the source of his inspiration. This is where the busy studio and live musician, composer and producer, among others for Bochum Theatre, Porsche and KissFM (the complete jingle package), Sat.1 ('Entscheidung in den Wolken', 2009 and 'Bis dass der Tod uns scheidet', 2008), prepared the "album in which I feel at home" in his own good time.

That explains why, with the help of his friends Ulf Kleiner, Tommy Baldu and Michael Paucker, the album only took three days to record in the studio. "When you don't over-rehearse it's easier for the musicians to introduce their own personality," laughs Daniel Stelter and goes on to relate how the drummer Tommy Baldu, who he knew from the band fronted by the 'Soehne Mannheims' singer Tino Oac, came on board for 'Homebrew Songs': "Tommy was my first contact point because I love his playing - and his unusual sounds." Baldu introduced the bassist Michael Paucker. Together they form an astounding rhythm section capable of creating outstanding energetic soundscapes (among others, they also play together in Quartett Triband – see the 'Trip' and 'So Together' albums which have both been released by Herzog records). Keyboard maestro Ulf Kleiner (whose magic touch on piano, Rhodes, organ and analogue synthesisers can also be heard in Jeff Cascaro's band) already knew Daniel from sessions long before they both began to study in Mainz. Having played together since then, both in the band 'Jazzteam' and as a duo, they communicate on a deep level. They also work well together on the songwriting side, as Kleiner's contribution to the tracks 'Slick' and 'Indigo' as well as his co-production credit demonstrates

Daniel wrote the track 'Amor Macio' together with the singer Liza da Costa. Her gentle Portuguese voice is responsible for the above‐mentioned exception to the otherwise instrumental 'Homebrew Songs'. Together with 'Monsterfee', it forms the "quiet part of the album," which is how the guitarist describes the melancholy floating jazz‐fado pop song. The 'intro' to the album, which opens as a kind of "what to expect next", makes it clear that 'Homebrew Songs' is not an album of introverse songs for miserable days. That idea wouldn't really occur to his listeners once they have decoded the track 'Menime': "Read backwards it stands for Eminem, someone I continue to be intrigued by. As with all the music that I like, his music contains a touch of the blues," says Stelter before going on to mention the soul‐inspired 'Flutter' and then pointing out 'Simple Plan' with its confident groove à la Donald Fagen. "Some people are incredibly thick-skinned. This song is dedicated to them. I could have called it 'Mr. Supercool'.

In 'Paperboat', Stelter shows that, along with radio‐friendly wah-wah guitars, he also knows how to arrange compelling encounters between different acoustic instruments. The song is based on the image of a paper boat slowly drifting along a river, intermittently getting caught and being picked up by the current again until it eventually capsizes. Guest bass clarinettist Frank Spaniol adds a moving obituary to the fragile toy. The symbol of the gently flowing river has been a long‐term inspiration for Daniel Stelter. All his life, he has been living on the banks of the 'River Rhine' which could be viewed as the continental counterpart of the Mississippi given how laid‐back 'Indigo' finally rolls on to the piers of the culture-steeped waterway. "