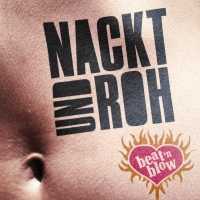 Who says that brass is the exclusive domain of the Bavarians? Trumpets, saxophones, trombones and tubas have long been breaking away from the Bavarian idiom, turning into a global vernacular. In a cultural melting pot, brass makes for a particularly hot brew. The nine gentlemen in beat 'n blow and their charismatic lead singer Katie La Voix certainly make use of the Berlin factor, in their case combining funk and soul with occasional flourishes of Mariachi, New Orleans, Caribbean and Balkan Brass along with a pinch of dub. On the ten-piece band's fifth album, once again recorded in Berlin, this febrile amalgamation of styles comes across a bit more direct, intensive and straight from the heart - or simply "NACKT UND ROH" (naked and raw).

Twelve angular brass-soul gems, interspersed with intimate interludes, hit the ear and slowly take root. In the opener “1000 KM”, a song about meeting a past love, beat 'n blow, bees in their bonnets, pour bubbly sounds into our ears. The title song is carried by a powerful bass drum, bearing a message of uncompromising, constant renewal: “Ich spiel nicht mehr Hide and Seek, du kriegst was du siehst, nackt und roh!” (No more playing hide and seek, you get what you see, naked and raw!).

There is no Gucci or Pucci gloss to be found on any of the other songs on the album: The galloping “Queen der Nacht” is a manifesto for strong-minded city girls disdaining superficial glamour while “What The Girl Wants” plays light-heartedly with disco and Vocoder sounds. “Louisiana Fish Fry” and “Wer auf der Welt” have a certain spicy New Orleans flair. In “Pretty Pictures of an Ugly Man”, a slice of cool funk unfolds over a buoyant tuba line, an effect that would not be out of place in a Prince song. However, at times the breakneck pace gives way to splendid oases of calm: “Simpler Schmerz” reflects on the rollercoaster ride of love in best “Track of My Tears” tradition, under the surface of “Irgendwohin” lurks a hymnal, reggae-edged sense of elation. Adding a cheeky flirtatious swirl to the final song, beat 'n blow reveal themselves as a band that has no problem combining chilly elegance with fiery brass. Fulminant, soulful vibes from the pulsing veins of the capital: If Berlin had a Funk Street and a Brass Lane, beat 'n blow would reside in a manic mansion at the point where they both meet.